The majority of SCCs are thought to arise from solar keratoses (sunspots). Both solar keratoses and SCCs are very much related to the total amount of UV radiation from sun exposure over a lifetime. A few also develop from other sources e.g. chronic ulcers or scars. Immune suppression after organ transplantation also strongly predisposes to SCC.

SCC usually arises as a tender, pink-red nodule or lump on the skin with a variable amount of scaliness on the surface. It typically enlarges over a period of months. Ulceration and bleeding become more likely as the lesion enlarges. A few will become locally aggressive and spread along a nerve. Large lesions have a greater potential to metastasise ('seed' elsewhere around the body) and may be fatal. 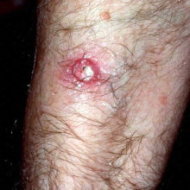 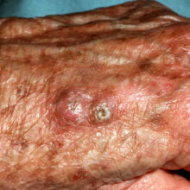 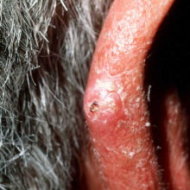 Solar keratoses are commonly known as sunspots, and they can evolve into SCC.

They are usually found on the chronically sun-exposed sites of the head and neck, back of the hands, and forearms. They are generally multiple and may sometimes be very numerous or confluent.

They have a whitish scaly top, often on a reddish base. They are generally not tender when touched, but may produce a variety of sensory symptoms such as pricking, burning, and stinging with sun exposure or perspiration.

Only a small percentage of solar keratoses evolve into invasive SCC, but they are usually treated to prevent this possibility. Treatment is commonly with cryotherapy (freezing with liquid nitrogen), or various prescription creams or other methods. 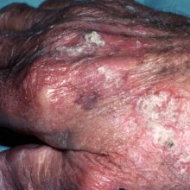 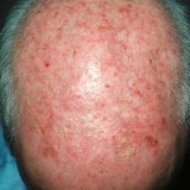 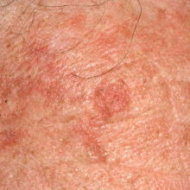